Si-Air batteries are currently an interesting perspective for the development of next generation batteries [1]. On one hand this is caused by the high theoretical capacity of silicon which either allows a smaller construction as compared to current Li-Ion batteries or enables extended running periods. Secondly, silicon is the second most abundant element in the Earth´s crust and therefore a relatively cheap resource. Finally, Si-Air batteries are also from an environmental aspect very promising: As only the ubiquitous oxygen from the air is consumed at the cathode no toxic materials are present. The reaction product is silicon dioxide, i.e. nothing else as quartz or sand. The general scheme of such a battery is depicted in Figure 1. 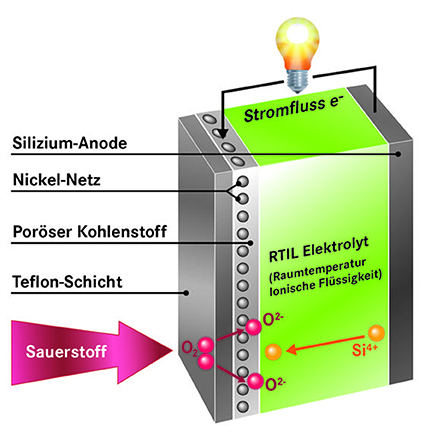 Corrosion consumes the Si-Electrode
Unfortunately, nowadays realized prototypes do not reach the theoretical capacity which is mainly due to two factors: The electrolyte is responsible for the ion transport between the electrodes and thus, its properties can influence the overall performance significantly. Recently, scientists of the IEK-9 at the Forschungszentrum Jülich achieved a breakthrough enabling to extent the running periods of Si-Air batteries dramatically [2,3]. Additionally, the interplay between electrolyte and Si-electrode causes a severe corrosion reaction which detracts Silicon from being discharged electrochemically. The group Applied Interface Electrochemistry led by JARA-ENERGY member Juniorprofessor Dr. Florian Hausen is investigating the evolution of the surface structure in order to gain a better understanding of the processes taking place during corrosion and discharge. As one micrometer corresponds to a millionth meter an Atomic Force Microscope (AFM) is used to establish a micro- and nanometerscale picture.

Characterization by means of Atomic Force Microscopy
An Atomic Force Microscope works by rasterizing a small tip across the surface of interest. Mechanical interactions occurring between tip and surface are detected and depictured as a surface profile. The color coding reflect the height information as darker colors correspond to deeper areas and brighter colors to upper parts of the surface. Figure 2 illustrates the surface structure of a Si-electrode which was discharged for 20 h with optical microscopy and AFM. 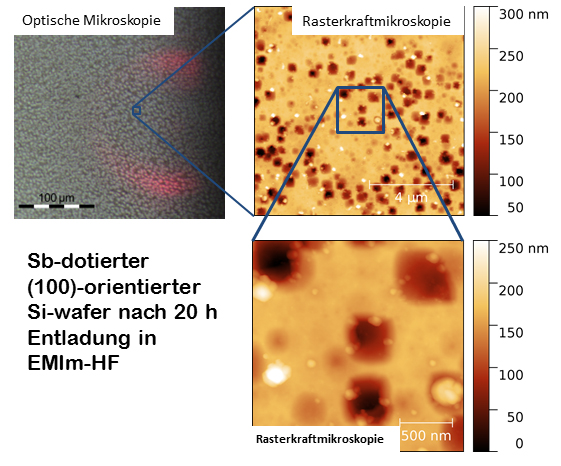 Figure 2: Images of the surface structure of discharged Si-electrode in various magnifications

Optical Microscopy reveals an irregular structure. Only by higher magnification using AFM the assembly of many small scale pores into the overall structure can be examined. The blue squares and lines are indicating which part of the structure is shown with higher resolution in the subsequent image. A closer view to the pores show there quadratic nature which is originated by the crystal structure, i.e. the arrangement of the individual atoms of the electrode. Further, it can be seen that the surface between the pits is relatively homogeneous confirming an anisotropic etching behavior which is in accordance to the behavior of silicon without discharge. However, the effective surface area for the discharge is influenced.

Time-dependent corrosion behavior
To understand the discharge behavior of silicon electrodes better, it is therefore essential to track the time-dependency of the corrosion reaction during discharge. Images of the surface of Si-anodes after various time of discharge are presented in Figure 3. 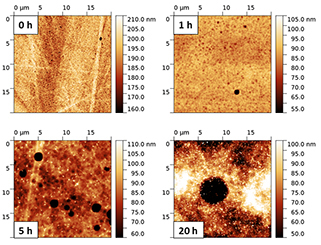 Figure 3: Development of the Si-Electrode surface during discharge as a function of time.

Within the first hour several of the characteristic pits are formed, however, not very pronounced. After five hours of discharge some of the structures grow and became considerably deeper. At the same time very small spikes pointing upwards are detectable at the surface (white spots in Figure 3, 5h). This time frame corresponds to the distinct drop in the potential decay during the discharge process of the battery.

Outlook
In spite of the recent breakthrough in lifetime of Si-Air batteries [2,3] lots of effort must still be invested to make this type of batteries successful. Further research has to be conducted to suppress the parasitic corrosion reaction during the discharge of the battery. The better understanding of processes at the surface at the micro- and nanometer level will contribute significantly. By the help of the IEK-9 at the Forschungszentrum Jülich the group of Prof. Hausen is currently extending the procedure of atomic force microscopy in this context to in-situ methods. Then, the Si-electrode surface can be investigated during the actual discharge process.

Acknowledgement
We would like to thank the numerous co-workers at the IEK-9 of Forschungszentrum Jülich involved in this study. Namely, Thomas Beuse is thanked for the atomic force microscopy images as well as Yasin Emre Durmus for the electrochemical measurements. Thank you very much!